That's the tagline for the Coca-Cola's BAR NØNE line of bottled alcohol alternatives. There aren't many "all in one" bottled alcohol replacements on the market today.

There are some craft sodas ( like New Creation Soda Works or Casamara Club's "leisure soda" ), there are non-alcoholic distilled "gins," there's non-alcoholic beer...

But when it comes to bottled mocktails, the selection isn't vast. You've got the yet-to-be-released in the US NOgroni from Seedlip, Curious Elixirs and BAR NØNE.

And that's good for Coke. Because BAR NØNE leaves something to be desired.

I don't want to ruin the surprise, so we'll get to the review. Cary the Sommelier (a level 1 somm) joined The Zero Proof again for this review.

Per Cary's recommendation, we tasted the beverages in this order...

Oh, and they're gluten free! The first thing you'll notice about the sangria is the deep, red color.

Then you take a whiff... it smells like sangria. Cary notes it's "all cranberry."

And it crushes you with vinegar.

To be fair, after the initial punch, your pallet adjusts and it goes down easier.

One of the biggest challenges for alcohol replacements is to get you to sip, not gulp... alcohol slows you down. But it's easy to chug most sugary drinks.

So BAR NØNE does this with lots of vinegar. It's a good idea. The tang definitely gives you pause. But the dosage is heavy handed.

Once the vinegar chills out, you get some autumnal, mulled-wine spices.

And the drink leaves you with an aftertaste pretty close to real sangria.

While the taste leaves something to be desired, the Sangria definitely keeps you from chugging... so, there's something.

Cary thought the drink would be better over ice (we tried it, and it is)... or maybe using as a wine replacement for your own sangria.

He also thought adding some ginger beer could help. So we added a splash of the Spiced Ginger Mule. A traditional Bellini is fresh peach purée and prosecco.

You do get fuzzy pears on the nose... and a lot of vinegar. Cary added it smells like organic fruit rollups (I asked if they just give you random things to smell in somm class as conversation starters).

The first sip stings the back of your throat (again... it's a sipper!).

Then your palate adjusts.

I tried to imagine myself at a brunch session with some friends at a hip restaurant drinking this in a flute... I almost got there.

The Bellini Spritz is a tasty, refreshing drink. But if you've had a well-crafted Bellini in the past, it misses that mark. I thought the nose here was pretty good... it smelled like a sweetened, alcoholic cider. Cary got a lot of white grape juice and vinegar on the nose.

You get similar, spice and mulled wine flavors to the sangria. And there's less vinegar (though it still stings you a bit) and more sugar.

After drinking three BAR NØNE varietals up to this point, we can say... they all blend together thanks to the high vinegar content. 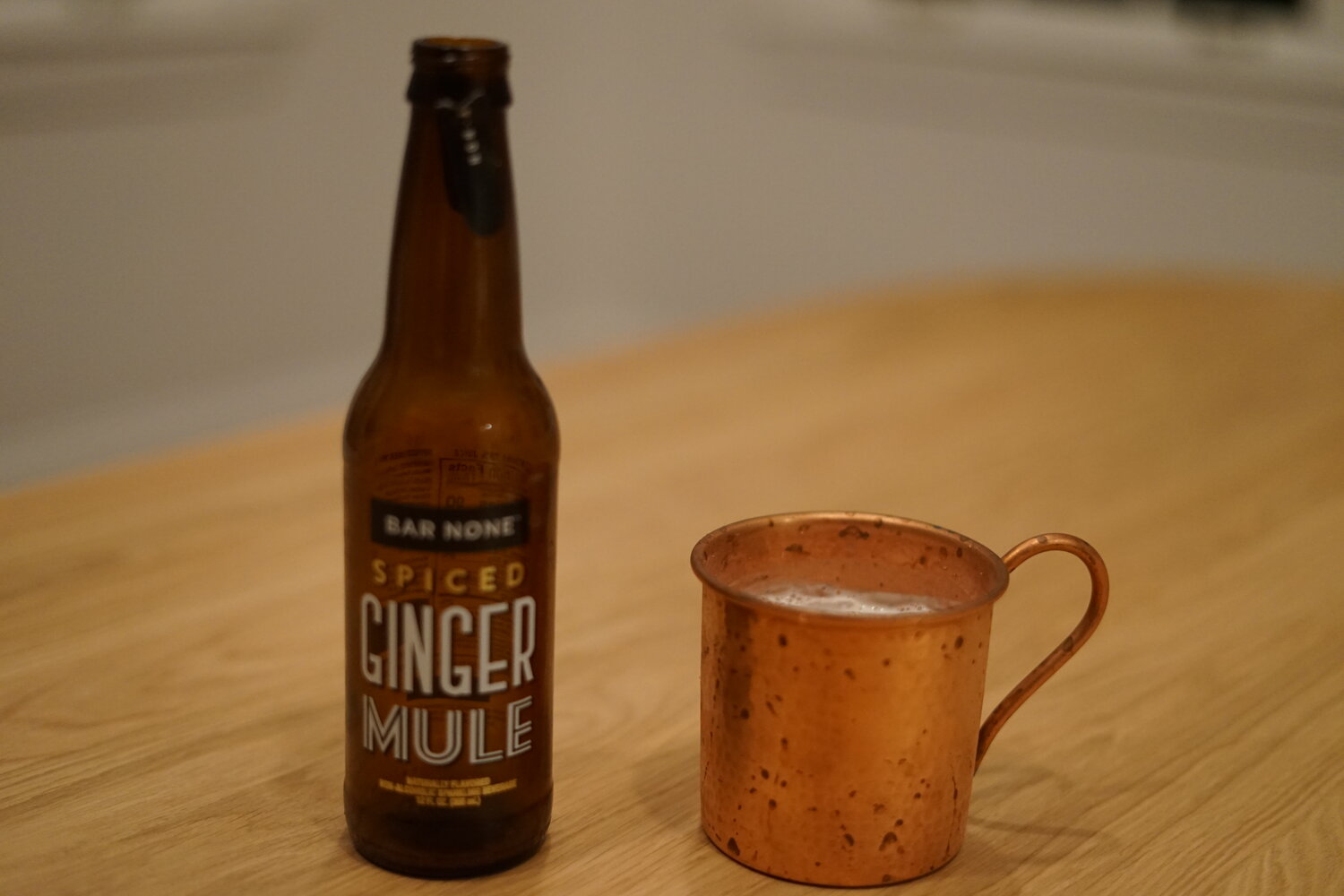 The Moscow Mule is one of the most popular cocktails in America... it's a mix of vodka, ginger beer and lime. It's traditionally served in a copper mug over lots of ice. And it's tangy and refreshing.

The Spiced Ginger Mule is a limier, washed-down version of ginger beer.

We took a couple sips and called it quits.

"It's kinda gross, like old, oxidized lime juice," according to Cary.

While the ceremony of icing down the copper mugs and hearing the drink snap over ice was nice, the Spiced Ginger Mule was a miss.

The Zero Proof commends Coca-Cola on noticing the growing, zero-proof trend and taking a crack at it. But, for us, BAR NØNE comes up short - especially considering the basically unlimited resources at Coke.

The drinks are all better over ice. And they're worth trying if you find them in a bar or restaurant... it's still something different from the usual non-alcoholic beer or juicy mocktail. But these won't make it on our normal repertoire.

We're sure Coke will impress us with their next, zero-proof effort.