Flash Sale: 30% Off RumISH for a limited time

Tonic water is for more than just a gin and tonic.

In fact, tonic water has emerged as one of the leading mixers in the non-alcoholic beverage space.

Tonic water's bitterness comes from quinine - a bitter compound derived from the bark of the cinchona tree. Quinine was originally used as a medicine to fight malaria. And because of its powerful effects, the Food & Drug Administration (FDA) says you can only use quinine in very small amounts (83 parts per million).

With the short history and regulatory info aside, let's get to the taste test.

Tonic water is simply carbonated water, quinine and - in some cases - lots of sugar.

And you'll find many choices at your local grocery.

Fever Tree has built a reputation as the premium tonic brand. But there's also Q Tonic, Jack Rudy... and the old, stalwarts Schweppe's and Canada Dry.

Some are super bitter, some are sweet... some have lots of bubbles and others fall flat.

We tasted eight tonic waters in total (we know there are lots more... and we'll add to this list).

Read on to learn which was our favorite... This is Fever Tree's signature tonic...

It's very citrus forward, fresh and light. It's not dry and not super sugary.

The Premium Indian Tonic also has good carbonation and a strong quinine flavor. In other words, it's very bitter and very bubbly - a good thing in a tonic.

There's also a bit of sweetness at the end that disappears into bitter. Schweppe's is the original tonic water, having first marketed the product for mass consumption in 1870.

Schweppe's has much less carbonation than Fever Tree... and it dissipates quickly.

It also has a more artificial, sweet flavor that makes it taste similar to a ginger ale (there's 33 grams of sugar per 12 oz. serving).

It's slightly bitter, but it doesn't hang around long. A sweet residue coats the mouth after you sip it. Q TONIC: Q Tonic makes a very mild tonic water. It's got low carbonation and much less bitter bite. You get a mild bitterness mid palate. But this drink finishes like a club soda.

Q makes a ginger ale we much prefer, which you can read about here. 1821 Bitters is a small company based in Atlanta, Georgia.

1821's tonic is acidic and citrusy with a bit of a smoky flavor. It's got vanilla/cola like flavors and isn't super bitter.

The most interesting thing about 1821 tonic is the color - what 1821 claims is the original color of tonic - a dark brown from cinchona trees.

The company also offers a tonic syrup, so you can make your own. Jack Rudy is a company based in Charleston, SC known for its cocktail syrups.

But the company also makes a bottled tonic water (along with a tonic syrup) for mixing.

While beautifully packaged, the Jack Rudy tonic is the mildest of the group. It's almost like club soda with lemon, not much bitterness. Canada Dry is super sweet with a little bitterness at the end. It's also kind of flat.

Not much else to say about Canada Dry! 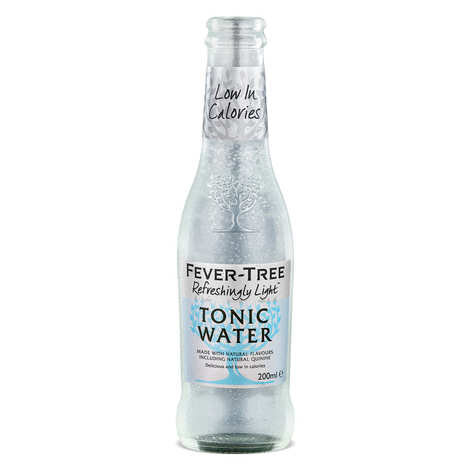 This entrant from Fever Tree has all the qualities of the Premium Indian Tonic, with a slightly muddier taste. AND THE WINNER IS...

There's a reason Fever Tree built a multi-billion-dollar business as a tonic water company - it's a good product!

The tonic water has great carbonation and bitterness, guaranteed to take your non-alcoholic cocktail to the next level.

And if you'd like to see The Zero Proof's favorite ginger ale, please check out this article...